New Resources Available
Continuous Learning Support due to COVID-19
Our Commitment to Anti-Racism
Register for virtual Access to Education 2021!

My first PATINS blog was in April of 2016. The title was “Mimi, would you read me a book?” It was about my grandchildren and them asking Mimi every time they visited us to read to them. Mimi took great pride in them not just asking but sitting close to her as she read. 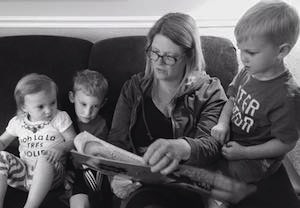 Fast forward to this week. I received a message from my daughter that contained a video of my granddaughter Kenzie reading. She is eight and in the second grade.

Kenzie’s teacher over the past week or so has been sharing with the class stories written by James Whitcomb Riley. It has fascinated Kenzie as he lived so close to her. More intriguing was her interest in his writing. She would come home and share stories she learned with her family.

Kenzie’s school happened to be on Fall Break this week so my daughter thought it would be interesting to go to the James Whitcomb Riley home in Greenfield, Indiana.

They took a tour and collected some memorabilia and on the way home Kenzie recalled all that she had seen. This is how I put into perspective what she had learned in school.

Kenzie could hardly believe the connections after just visiting his home. Another tidbit, on James Whitcomb Riley’s birthday the Riley Cheer Guild would give out Raggedy Ann dolls to patients. I’ll let you make the connection.

I wrote about Mimi reading to the grandkids in my first blog and it has come full circle over the past four years. The love of being read to has sparked a desire in Kenzie to read and her interest in James Whitcomb Riley has provided a timely story for the season.

It has come full circle and Mimi and I could not be any prouder. Not only for Kenzie, but for all of our grandchildren who have shared in the gift of reading.
Tweet
A Letter from 2020
Throw Out Your "Low Tech" Stuff

This is one of my favorite poems from childhood. Thanks for sharing Kenzie reading! You and Mimi have blessed your grands with this gift.

0 Cancel Reply
This is one of my favorite poems from childhood. Thanks for sharing Kenzie reading! You and Mimi have blessed your grands with this gift.
Cancel Update Comment

By accepting you will be accessing a service provided by a third-party external to https://www.patinsproject.org/