New Resources Available
Access to Education 2022 Registration is Open!
Our Commitment to Anti-Racism

A Taste of Anxiety

For my birthday and spring break last month, I was fortunate enough to celebrate in Mexico with my husband, Chris, and some friends. We spent the first part of the trip in Puerto Vallarta. It is a remarkable city filled with buzzing culture, delightful foods, beautiful beaches, and lovely people. As one of Mexico’s tourist destinations, many local staff speak English in addition to their native language. This was much appreciated by the majority of our group since we are English speakers trying out our tiny bits of conversational Spanish on occasion. 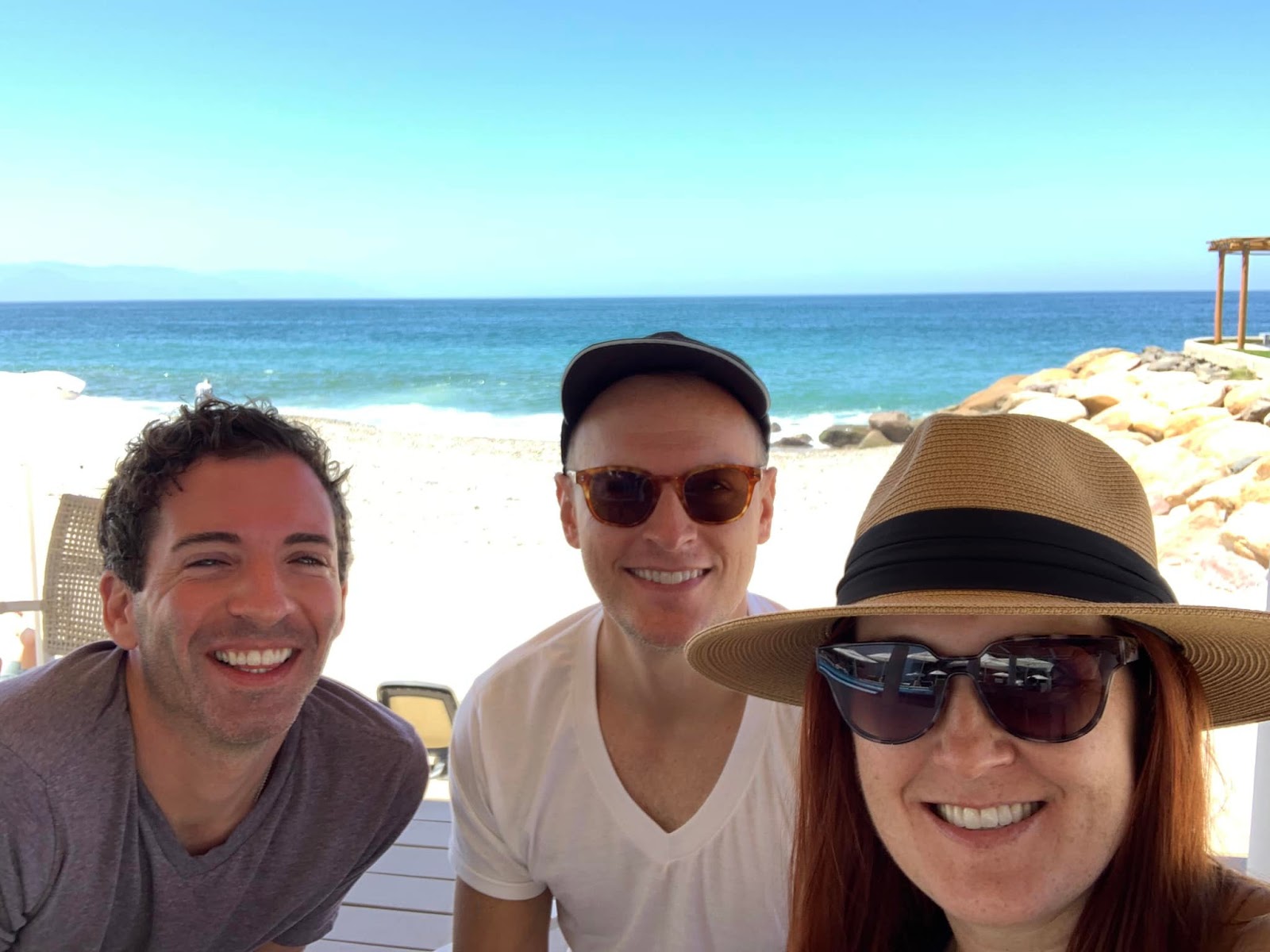 Friends at the beach in Puerta Vallarta. From left to right: Andrew, Chris, and Jena.

The second part of our trip took us to Mexico City to continue our vacation with our close friend, Andrew, who recently moved there for a new job. It was wonderful getting to see where he resides and to be guided through the city by someone who knew his way around. It was especially nice having a guide who is multilingual and speaks Spanish fluently. This is because I naively overestimated the number of English speakers in Mexico City based upon my previous international travels to tourist destinations in non-English speaking countries.

Despite a language barrier for my husband and me, Andrew confidently led us through a handful of the city’s neighborhoods, to some amazing restaurants, and to some of the “can’t miss” sites to see. One of our adventures included a hot air balloon ride at sunrise over the architectural site of the pre-hispanic city of Teotihuacan. It has gone down in my book as one of the coolest experiences I’ve had to date! 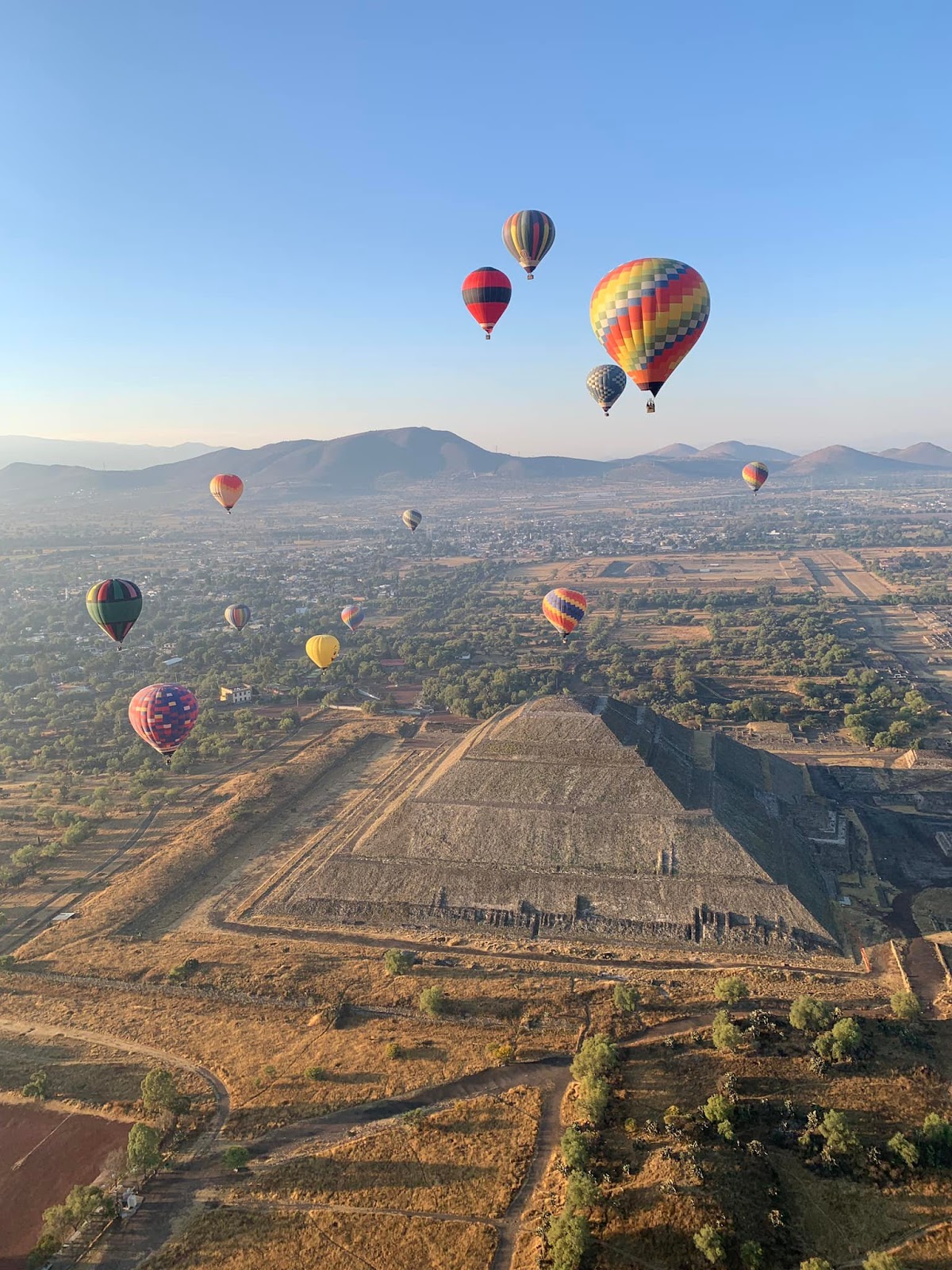 Vantage point from a hot air balloon of one of the two remaining pyramids of Teotihuacan.
Overall, the trip was refreshing, enlightening, and a total blast until the language barrier came for us the morning of our flight home…

It was 6am and we were pulling up to terminal one, the domestic terminal, because Andrew was also flying out to venture to another part of Mexico the same morning. Thankfully, before getting out of the Uber, he had chatted with the driver about taking us to the international terminal--terminal two--upon his departure.

So we said our goodbyes, Andrew walked into the airport, and we got back in the Uber. Expecting the Uber to head to terminal two per the conversation he had with Andrew, Chris and I buckled up and I said, “Terminal two,” to which the driver began responding to me in Spanish as we stayed parked at terminal one.

My anxiety was immediately awakened, and Chris and I looked at each other with confusion. I began asking myself what are we going to do? Why isn’t he driving? How far is terminal two? Is there another way we could get there?

I decided to get out of the car and look around for someone that could possibly interpret for us. The only language I was hearing was Spanish, and there were not that many people around. Failing to find an interpreter, I got back in the car and pulled out Microsoft Translator on my phone. Now, I wish I could tell you a success story about how this app magically saved us and opened lines of communication in this moment, but sadly, it did not. Instead, when I would put the phone close enough to the driver for my speaker to pick him up, he would stop talking. I tried asking him to repeat in Spanish (though I wasn’t even conjugating the verb correctly), but he remained silent.

With my anxiety becoming palpable, I decided to give Andrew a call, though I wholeheartedly did not expect him to answer. Luckily, he answered my call. I explained that the Uber driver wasn’t leaving terminal one and that we were not able to figure out why. I then put Andrew on speaker phone so that he could talk to the driver.

After a short conversation between the two of them, the call went silent. I could tell Andrew was still on the line, but he was not replying to my frantic calls of his name and asking him what’s going on. I look over at Chris and think, what are we going to do? Why isn’t Andrew answering me? At this point, I made the decision to get out of this car and be done with the ride. Chris and I got out, and I began knocking on the trunk to communicate that we needed to get our luggage out.

Our efforts were gratefully met with the driver saying, “Hey, hey!” and pointing to his phone. This is when I noticed that Andrew had requested a new Uber ride with our driver to get us to terminal two. With some cautious relief, we got back into the car. The driver accepted the ride on his app, and off we went.

I couldn’t have been more relieved to arrive at terminal two. As it turns out the terminals are far enough apart that we couldn’t have easily walked, and navigating a way there would likely have proven just as stressful as our Uber situation due to the language barrier.

Heading into the international terminal and being greeted by someone who was multilingual began to tamp down my anxiety, though now I was feeling somewhat nauseated from the stress. Regardless, we had made it with enough time to get checked in, through security, and to grab a snack before our flight departed.

I’m sharing this story with you because it highlighted the anxiety and full body stress I felt in a single experience in which a language barrier was present. Upon reflection of this moment, I’m filled with empathy for our English learners in our schools and communities. This is because as someone who knows some Spanish and how to use translation technology, all my knowledge flew out the window in a time of elevated stress. Your students and families have likely felt the same way in more than one instance.

It is my hope that this story helps you reframe the experiences of your students and their families who are learning English. Could you be offering a more inclusive experience at your beginning and end of the year events and gatherings with Office 365’s Present Live in PowerPoint? Have you implemented apps like Microsoft Translator during conferences or meetings to support equitable communication? Have families been included in the training of their student’s assistive technology through an interpreter?

We know there are many languages present in our public schools and not all languages are supported through translation technologies, but we are here to help you navigate those waters. Microsoft, iOS, and Google do have some great translation tools for many languages though. It would be my pleasure to support your use of any Microsoft or Windows based tool as the Microsoft/Windows PATINS Specialist. Email me any time! Plus, our passionate English Learner Specialist, Amanda Crecelius, would be happy to support language access for your multilingual students.

7 Jul
New School Year, New Student: Prepping for Your New Student Who is Deaf/Hearing of Hearing
7 Jul
You, as a Digital Rights Manager
13 Jul
Design with the Right Tools: An Introduction to Universal Design for Learning (UDL) and Assistive Technology
13 Jul
Captions for All: The Writing's on the Wall
13 Jul
Close Your Eyes and Imagine UDL: Summer of Learning Conference, Lewis Cass